A planned futuristic vintage town in the works…

Montana has several things going for it. To begin with, Montana as a whole has an extremely low population density. Only two U.S. states have a lower population density (only one of which is in the continental U.S.). In order to truly be independent, a rural and sparsely populated location is vital. The effects of nearby communities will be much more successfully mitigated if the town of Oakwood is situated in a remote part of the country, far away from any urban areas. The effects of chemicals and radiation, particularly the latter, can be felt a long way from the source from which they originate. In order to be out of range of cellular towers, a rural location is required, as the town is to have no cellular coverage and no mobile connectivity. While we can prevent antennas from being erected in the town, lack of control over the town's surroundings means either a buffer of land is required or the setting must already be relatively desolate to begin with. As a whole, urban areas today are extremely toxic, and rural areas at present and in the future are going to be the only safe places to live. The "small town" of Oakwood will still be a part of the rural landscape.

Because much of Montana is uninhabited, land in "Big Sky Country" is also relatively cheaper — in fact, land in Montana is cheaper than almost anywhere else in the country. Estimates on this statistic vary by source, and land in the eastern part of the state is generally cheaper than land in the (more mountainous) west. Since Oakwood will require a lot of land — as much as reasonably possible — even a small difference in the cost of land per acre will make a huge difference in the overall upfront costs of the town as well as future ongoing property taxes for residents.

As an added bonus, Montana is relatively safe. Think about it — what natural disasters are prevalent in Montana? If you can't think of any, you're in good company. TIME has ranked Montana to be the safest place in the U.S. to live — in fact, 7 out of the top 15 safest counties in the U.S. are located in Montana (nearly half)! This includes the (#1) safest county, Sweet Grass County!

Here is a map showing all of Montana's counties with their safety indicies (out of all 3,114 counties in the United States):

Here is a ranking of the 30 least densely populated counties in Montana. For reference, Waukesha County (WI) is ~550 square miles (with density of 709). Compare the populations with the areas and you will see that Montana is chock full of ideal counties. 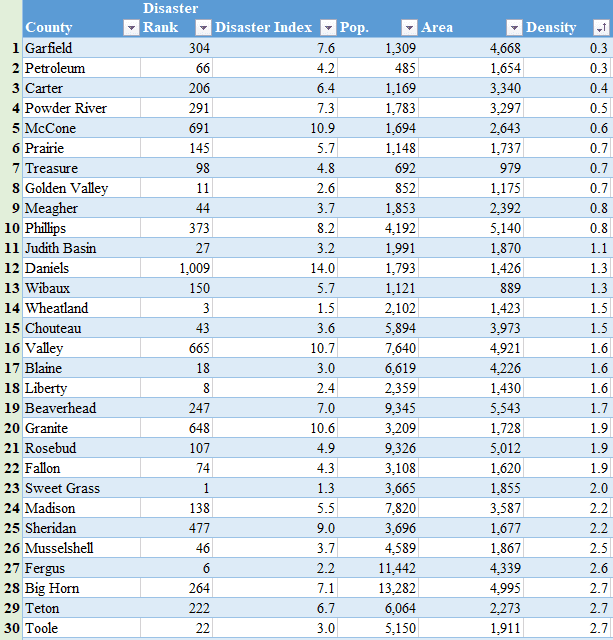 Download full spreadsheet containing safety indices and population densities. You can sort this one appropriately to obtain a full list of counties sorted by density if you desire.

Ideally, we would like to situate Oakwood in a county that is both extremely safe (one of the top 100 safest counties in the country) as well as sparsely populated. Considering that most Montanan counties have a very low population density compared to the average U.S. county, any of the counties in the chart above would work perfectly, as they all have an average density of under 3 people per square mile.

To obtain a list of the best locations for Oakwood, rankings by safety and by density are taken into account. Another important factor to look at is price — essentially cost per acre/sq. mi., which may not correlate perfectly with density. Another factor is population change over time, such as that depicted by the picture below: 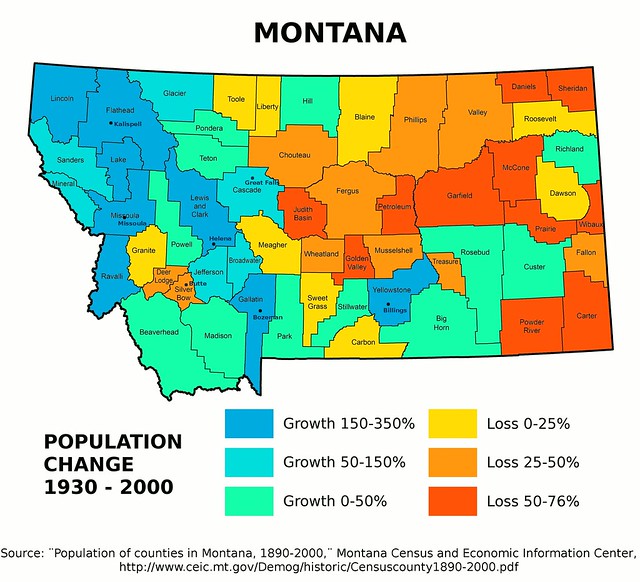 Factoring natural disaster safety, population density, and population change statistics into account, here are our top choices for counties. Because all the population densities are relatively low, and are only averages, lack of cellular coverage and safety were given the highest weighting.

We are currently locating ideal properties in each of these counties. If you know of any properties that are relatively cheap (less than $1,000 per acre) and are decently sized (at least 100 acres), please let us know!